Trutnov is a modern  city with a rich history. The centrum of Trutnov is declared by an urban conservation area. Krakonosovo square is lined with arcades, the center of the square is decorated with the Krakonos Fountain, the Baroque Holy Trinity Column from the 16th century, the Old Town Hall building and other monuments. The founding of the city is associated with the dragon legend, which can be found in different parts of the city.

2. The Educational Trail in the Footsteps of War in 1866

Cycle Trail 4212
The cycling trail is part of a long-distance cycling route that runs from the Polish border area through Trutnov to Dvůr Králové nad Labem and further to the battlefield of the decisive battle of the entire Prussian-Austrian War – Chlum near Hradec Králové. The shorter circuit (2.8km) leads from Krakonošovo Square across the Šibeník Hill with the General Gablenz Memorial to the Chapel of Sts. John the Baptist. This part is followed by a longer circuit (12km) which passes through other places of significant fights and makes some less known monuments accessible.

Gazebos with a fireplace and a supply of wood are in the town’s park, for example, with the bikepark Vlcka, near Paradraha, on Roland’s Lookout and other places. You can sit here and gain a new strength. Rest parks are also located in the forest park.

Not far away from cycle trail 4212
- is the outdoor sports ground situated in the forest park and is equipped with many exercise elements and can be a suitable complement to all-day sports entertainment.

Above the road Trutnov – Stary Rokytnik – Upice
In Trutnov city park you will find the Vlcka Bikepark. You can ride and test your skills on wooden footbridges, droplets, banked bends up to 10m jumps or rockgarden… Vlcka has 7 different tracks, which are different at difficulty and character.

Bicycle trail NS in the footsteps of the War in 1866
There is a cycling trail in the recreation forests of Houska. The surface which is  suitable for riding on roller skates and roller skis. In the immediate vicinity of the trail are shelters and several exercise elements, including a gym.

Cycle Trail 4209
Unique duality and rarity, which is included in the list of the technical monuments, is located on the outskirts of Trutnov in Porici. There are two railroads crossing the bridge and the bridge also crossing the road and the river.

A network of one-way montain bike trails in the area of Cizek stones and the Jestrebi Mountains offers to visitors natural single trails of various difficulty levels. The starting points are Trailcentrum in Lhota near Trutnov and Parking spot is situated Under Sedmidomim. www.trutnovtrails.cz

Cycle Trail 4209, Trutnov trails
Cycle trail 4209, Trutnov Trails Cizkovy stones are themselves a place with a strong genius loci. Thanks to their rock walls they are nicknamed like a little Adrspach. The biggest attraction is called ,, little cave“ literally the rock overhand, under which Trutnov industrialist Walzel was hiding during the Battle of Trutnov in 1866.

Cycle Trail 4092
It is the birthplace of a famous czech writer Karel Capek. In his native house you will find a museum dedicated to him and his brother Josef. However, the village is not the only reminder of famous artists. Mlade Svatonovice is a starting point to visit an interesting tourist places. Before continuing your journey, you can also visit the Marian Park with the Stations of the Cross.

Cycle Trail 4091 (on the green trail)
Žaltman (earlier called Hexenstein = Witch Stone) is the highest montain of the Jestrebi Mountains, the Broumov Highlands distric. It is a natural monument where protected plant species such as spring snowflake occur. On the top is a lookout tower.

Near the cycle trail 4091 (on the green tourist trail)
Also known as the Markousovice Lookout Tower, it is on a nameless peak with a height of 708 m above sea level in the Jestrebi Mountains. At the lookout tower, there is a wooden resting gazebo and the information desk.

Near the cycle trail 4084
An interactive musem where you can find out all about flax and wool processing and where you can try the whole proces with your own lucky string. You can also use the art workshop www.dumpodjasanem.cz

Cycle Trail 4210, 4081, 4084
The greatest modern fortress in Czechoslovakia,  unique even on a global scale, is preserved as the builders had to abandon it after the Munich dictation. You can explore the underground fortress and militay-historical exposition. You can also visit the immediate surroundings, where trenches and firing positions are arranged. The Eliska Lookout tower offers a beautiful view of the surroundings. 7km Long natura trail Trutnovsko, which leads through the line of heavy and light fortifications, which was one of the most massive in Czechoslovakia.  www.stachelberg.cz

Cycle Trail 26
The extinct village which is slowly absorbed by the Krkonose nature on the slopes of the Rychory forest. The whole area is declared a natural monumnet. The 16th century arched stone bridge is also worth mentioning. www.areal-mladebuky.cz

Cycle Trail 26
The nature of the swimming pool creates a pleasant space for relaxation. There is a possibility of swimming, refreshments in the restaurant and accommodation. www.lesniplovarna.cz

Near the cycle trail 4300
It is a year-round open air entertainment area with a bobsleigh  track, Bald’s World (swings, jungle gym with toboggan ..), summer tubing and also with bike and electric bikes. www.areal-mladebuky.cz

Cycle Trail 4300
The ruins of the castle from the second half of the 15th century, around which leads the Nature Trail around the Hell’s Hill. www.areal-mladebuky.cz

The 4300 Cycle route connects the Elbe Trail in Hostinné. www.labskastezka.cz

Cycle Trail 4299 - continue along the blue trail
The best cycling camp 2017 (3rd place in the poll) cyclists welcoming offers accommodation (cottages, brick houses, mobile homes and furniture tents), restaurants, snacks, playgrounds and sports facilities. An integral part of the camp is a recreational reservoir with a grassy beach and a fishing pond. www.kemp.dolce.cz

Near the cycle trail 4092 or 4090
in the museum with the motto ,,Looking for old beauty, we find a new benefit‘‘ in the area of the former agricultural cooperative in Radeč u Úpice you will find an exhibition of historical agricultural machinery and crafts of the Krkonoše region.  www.chalupeni.cz 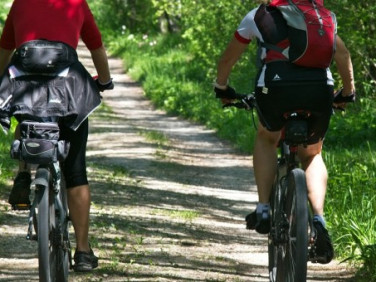 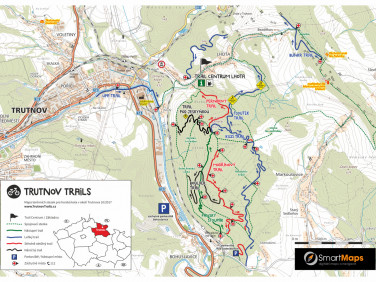